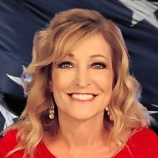 Known as “Dynamite in a Dress”, Andrea Kaye discusses all of today’s hot topics, from politics to entertainment to the boardroom in her unique, southern, sassy style.

Andrea is a TV and Radio commentator/host, appearing regularly as Guest and Fill in Host for Tipping Point on One America News, America Talks Live on NewsMax TV, CNNI, News With Ed on RTTV, KUSI News, Fox 5 San Diego and America Trends TV on You Too America Network.

Andrea was Host/Reporter for West Coast Weekly with Andrea Kaye on The Blaze TV and KDOC, and Video Journal News, an online community events program featuring such fun local venues as The San Diego Safari Park, The USS Midway Museum, Birch Aquarium, and others. Segments can be viewed online at vimeo.com.

As Co-Host for “Perspectives”, Andrea debated and discussed some of the hottest of today’s topics with a diverse panel.

As an on-camera Spokesperson, Andrea has worked with companies such as Time Warner Cable, APT Companies, National University, UCSD, Disney Vacation Club, and many others.

Andrea’s acting credits are numerous. Most recently, she starred in the Television Movie, “LORe: Deadly Obsession”, which aired internationally on ID Discovery Channel to great reviews.

“She was written as a straightforward villain, but you brought depth and humanity to her that I could never have foreseen. Thank you.” Richard Swindell, Director.

As TV Producer, Andrea’s credits include multiple political Documentaries, including “Iraq & Beyond”, which aired on San Diego Fox 5.

Andrea graduated from Louisiana State University with a B.A. in General Business, emphasis in Finance.

Our military takes an oath to fight enemies foreign and domestic. Mattis has taken up the side of the enemy
I think anyone shocked hasn't been paying attention to the grip the new world order deep state unelected beaurocrats have on our government and therefore our lives. If you're shocked, pull your head out and get woke.
The Andrea Kaye Show coming up in 15 minutes. George W Bush is trending. Would you vote for Biden after his "endorsement" today? What's the end goal here? What are the "protesters" actually aiming to get? San Diego Mayor ends carotid restraint. What LE Agency said refuses to stop using it? 6pmpt www.theanswersandiego.com CALLERS 888-344-1170